jhflores March 2, 2012 Comments Off on Bum Rush The Page

To most readers, the hundreds of tightly rhymed, orally friendly poems here will read as “slam.” But in his introduction, Medina, a poet and activist, takes great pains to separate the poems from slam’s crowd-pleasing limitations, and uses the term “def jam” to describe the political spoken-word poetry he and Rivera, also a poet-activist, have collected. Medina’s and Rivera’s emphasis is on the poem and its subject matter, not the poet, which makes for a remarkably democratic anthology. 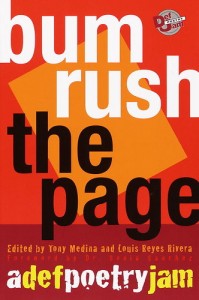 Every poet has about the same page and a half of space. The book’s design puts the poets’ names in a very small type. None of the big names—June Jordan, Reg E. Gaines, Edwin Torres, Wanda Coleman, Patricia Smith and Amiri Baraka—are given more attention than the less published. Organized by subjects such as “Blood, I Say, Study our Story, Sing this Song,” “Drums Drown Out Our Sorrow” and “Seeds of Resistance,” most of the poems use urban imagery, tough talk and declaration. Most are identity-centered, anti-racist and pro-activist. Many focus on current events. There are, for instance, at least four poems about Amadou Diallo, the unarmed Ghanaian immigrant killed by New York policemen as he stood in his doorway. All mention the 41 shots; all include the word “mother.” There are poems about Shaka Sankofa (convicted of murder at 17, and executed nearly 20 years later under Texas’s then-Governor George W. Bush), and homages to Cuban bandleader Tito Puente. Some readers will wish for more variation of theme and for more layered meanings, but the topicality and directness of the poems make this an ideal textbook for introductory poetry classes, especially for urban high school students, and for anyone interested in poetry as a social art.

To be sure Bum Rush the Page: A Def Poetr Jam will be hailed as a classic in the years to come. Combining established poets like Amiri Baraka and Sonia Sanchez with up and coming poets like
Shaggy Flores, Mariposa and Thien Bao Phi. The subject matter is broad and the chapter titles read like a poem itself. You know the ride will be better, every openign poem of each chapter will draw you in, asking for more, wanting you to write a poem, making you love the poem and understanding that poetry isn’t only shakespeare and his sonnets. Bum Rush the Page will live in cirriculums for years to come. From Beau Sia’s “Open Letter to the Entertainment Industry” to Bonafide Rojas”s “The Creed of a Graffiti Writer”, these poems reflect poetry in the 21st century. Tony Medina and Louis Reyes Rivera have done justice to opening people’s eyes on what poetry will always be, the voice of the people.

Buy the Book
Inside the River of Poetry