jhflores November 19, 2012 Comments Off on Because It Matters: Jesús Papoleto Meléndez and the Nuyorican Aesthetic

Legendary nuyorican poet Louis Reyes Rivera proclaimed that every human comes into this world performing their first poem. Every day, in hospital rooms around the world, we can hear the cries of babies as they make their transition onto this planet we call Earth – the third rock from the sun. To the casual observer, these first cries by newly born humans might sound like pain, but to a poet with a well-trained listening ear, these cries are part of a larger poem still being written by the human race.

The child enters the world uttering their first words “I too matter, look at me world, I am here floating in space for a short time! My voice matters and you need to pay attention!” The live performance and tone of this poem might take twists and turns during our lifetime, but it is certain that each day we must wake up to play our role in the grand play we call life. In the seminal book Hey Yo! Yo Soy! 40 Years of Nuyorican Street Poetry, A Bilingual Edition, Jesús Papoleto Meléndez (affectionately known as “Papo”) contributes to this chorus of voices and makes a bold statement that he is a gifted Nuyorican man of letters, an authentic Puerto Rican voice that matters in the American literary canon.

For more than one hundred years, Nuyorican writers have played a pivotal role in shaping and reshaping the literature and art of the Puerto Rican Diaspora. From the first generation of Puerto Rican independentistas living and writing in self-imposed exile in New York City, early Nuyorican writers vigorously used their craft to challenge the social conditions they faced. Since the early 20th century writers such as José Antonio Dávila, Luis Pales Matos, Clemente Soto Velez, Bernardo Vega, Virgilio Dávila, Jesús Colon, Julia de Burgos, and Mercedes Negrón Muñoz (Clara Lair) have worked heavily to lay a foundation of Puerto Rican literature that chronicled the everyday struggles of Puerto Ricans as they traveled back and forth between the island and New York City. This emerging literary form discussed political themes painted on literary postcards that communicated the beauty of Puerto Rican culture. While these original writers did not refer to themselves as Nuyoricans, they clearly made a distinction that unlike their island counterparts, much of their poetry focused not only on island themes but on the emerging Puerto Rican community in New York. In addition, they began to delve into African Diaspora identity issues in relation to the Negritude Poetry Movement that was influencing poets such as those writing during the Harlem Renaissance.

Spanning from the Great Depression through the Vietnam War, Nuyorican writers played a key role in chronicling the great migration of Puerto Ricans leaving the island to pursue economic opportunities in New York City. Through their writings they kept alive a continuum of radical independent Puerto Rican literature centered on a grassroots cultural-politico approach to counter the after-effects of imperialism, racism, and economic exploitation. Their writings focused on a free and independent Puerto Rico while at the same time promoting a unified community in New York City. They, like many other groups in the African Diaspora, followed in the long tradition of communal responsibility. This communal responsibility was solidified as a means to survive in an environment plagued by dilapidated houses, slum lords, and high crime. The living conditions in New York City were the result of the economic constraints in the 1960s and 1970s that many cities throughout the country encountered, combined with the white flight that began shortly after the legal ruling that public schools would be desegregated.

In these conditions, Nuyorican Literature entered its adolescence and writers such as Jesús Papoleto Meléndez made their mark as founders of the Nuyorican movement and as leaders in Puerto Rican literature. By 1975, after running out of space in his East East Village apartment that served as a hosting ground for the movement, Nuyorican Poet Miguel Algarin and a few others rented an Irish bar called the Sunshine Cafe on East 6th Street and rechristened the new space as The Nuyorican Poets Café. It would be this café and the anthology, which followed that same year – Nuyorican Poetry: An Anthology of Puerto Rican Words and Feelings – that would cement Nuyorican Poetry as a permanent fixture in the Puerto Rican Literary canon. 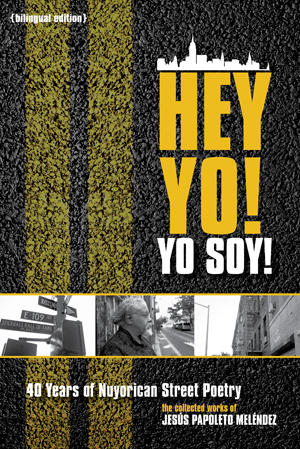 If we move forward in time to 2012 and read Hey Yo! Yo Soy! 40 Years of Nuyorican Street Poetry, A Bilingual Edition, we get a clear overview of the social conditions facing these Nuyorican Pioneers, as well as a personal narrative from one of its most gifted representatives. Serving as an anthology of his first books and moving into the present, Papo’s poems speak to the human condition and demonstrate the progression of poet as not only an observer of the barrio but also as an active participant in changing the landscape of activism that emerged during those times. Discontent simply writing about the moment, Hey Yo! Yo Soy! reveals that Nuyorican Writers serve as cultural workers in regards to their art and to its use as a positive change agent for the very communities they describe.

Rather than reviewing Papo’s book as another anthology of poetry, closer inspection reveals that he has given the reader an honest historical overview of the 1960s through the new millennium, while challenging the reader to question much of the hypocrisy we encounter in our everyday lives. Hey Yo! Yo Soy! is a brilliant representation of the Nuyorican Literary Aesthetic and positions Jesús Papoleto Meléndez as a keen observer of the social condition who is doing extraordinary work. In Papo, we find a modern day Griot, an Urban Forecaster who cuts through the complexity of life and gives us a simple painting that the common man can understand.

Of even greater significance, is the fact that this book was painstakingly translated from English to Spanish with all of its Puerto Rican colloquialisms to demonstrate to the reader the two worlds that Nuyorican Writers must navigate in order to communicate with a diverse audience. In many cases, the Poet is often found writing in three languages – English, Spanish, and Spanglish. These translations from English to Spanish and even Spanglish, have historical importance as Papo is one of only a few Nuyorican writers to translate their work from English into Spanish rather than the reverse preferred by academics. By translating the work, the reader gets a good glimpse into the power of language and how, even after translation, the impact of Papo’s poetry cannot be denied.

Jesús Papoleto Meléndez is an icon and a literary hero who has given us over 40 years of literature, which has inspired countless numbers of activists and writers, while standing the test of time. As all humans have a poem to perform throughout their life, so too does Papo share in his poetry the beauty and color of the Nuyorican Experience. In his poems, in his voice, we not only meet the social ills of the inner city but we also see the hopes and dreams of a community. Without his contributions, his gifts, along with the work of his comrades, many young Nuyorican writers and scholars believe that there would be no Nuyorican poetry movement. Nuyorican Poets are more than just artists; they are also historians chronicling the history of the community in a matter befitting the subject. For Papo’s diligence in helping to craft and preserve the art form, the reader is given the gift of poetry in its glorious and naked true form. In Hey Yo! Yo Soy! 40 Years of Nuyorican Street Poetry, A Bilingual Edition, we have an excellent representation of Nuyorican Poetry and the progression of a writer who has helped to create, mold, and preserve the art form. Because of his contributions, we the readers are eternally grateful for his unique voice.

Pa’lante! Siempre Pa’lante Hermano! From the Barrio to the Academia, may your pen continue to blaze a path for our gente to follow. Punto!