The Bandana Republic: A Literary Anthology by Gang Members and Their Affiliates

jhflores March 2, 2012 Comments Off on The Bandana Republic: A Literary Anthology by Gang Members and Their Affiliates

Urban youth gangs and street associations are viewed more often than not as training grounds for thugs and felons. Left out are their members’ emotional sensitivities, their political consciousness, their individual and collective capacities to assess the social conditions that gave rise to the need for such associations. Not included in the popular dialogue on gangs is the creative impulse that has continued to manifest in popular culture – from the birth of the Blues to Rag Time and Swing, to BeBop, Doo Wop and Hip Hop. From the Student Non-Violent Coordinating Committee (SNCC) to the Black Panther Party, Brown Berets, Young Lords and Brownstone Rangers to the height of the Civil Rights Movement to our current Hip Hop culture, urban gang rhetoric and its symbolisms have informed almost every major social movement of this century. They have also played a role in protecting neighborhoods, initiating food and clothing drives and in taking on housing-related issues such as gentrification. 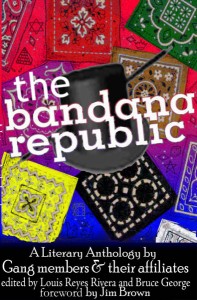 Like many adolescents, they initially attached themselves to the available rough-n-tumble street role models, becoming active gang members and adopting “the ways of the street.” Inside of this framework, and in spite of the stereotypical conventional wisdom concerning street gangs, they were also reared into the creative aspirations of their respective communities. Not just dancing and styling, but reading and studying, learning to develop the gall to give voice to the voice.

Louis Reyes Rivera is among the more respected underground poets, having assisted in the publication of over 200 books. Known as the Janitor of History and a living bridge between African and Latino Americans, he has taught courses on Pan-African, African-American, Caribbean, and Puerto Rican literature and history, as well as Creative Writing. In addition to solo recitals and lectures, he has worked with jazz bands (Sun Ra All Stars Project, Ahmed Abdullah’s Diaspora, Ebonic Tones, and his own, The Jazzoets), appeared on HBO’s DEF Poetry, and hosts Perspective on WBAI, 99.5 FM. Other works by Rivera include Scattered Scripture, In Control of Spelling (Four Editions), This One For You, and Who Pays The Cost. His CD releases include Live @ Sistas’ Place,A Jazzoetic Jam (anthology with Atiba Kwabena), Ahmed Abdullah’s Dispersions of the Spirit of Ra: Traveling the Spaceways, and YO! He has also edited the following anthologies: Bum Rush the Page: A Def Poetry Jam (withT. Medina), Portraits of the Puerto Rican Experience (with Adal Maldonado), Womanrise, Love: A Collection of Young Songs, and Poets in Motion.

Bruce George is a visionary, executive producer, writer, poet, and activist born and raised in NYC. He has written testimonials for the likes of Essence, Emerge, and Class magazines, Harlem River Press, and others. Bruce is the co-founder of the critically acclaimed Russell Simmons’s Def Poetry Jam. He has won several awards including a Peabody Award and a Milky Award for Def Poetry, an Upscale Showcase Award, a Trail Blazer Award, and others. As an activist, Bruce has been and currently is associated with major grassroots organizations that foster and uplift people in struggle. Bruce comes out of gang culture and is committed to anti-gang-violence initiatives. He has served on numerous panels (Hampton, Harvard, The New School, Fordham University, Medgar Evers, Schomburg Center for Research in Black Culture) and has judged hundreds of poetry/spoken word competitions.