Nuyorican Poetics in the New Millennium

Since the advent of the Atlantic slave trade, the notion of Good Hair versus Bad Hair has haunted members of the African Diaspora. Hair, as a political tool, has come to epitomize the struggle between self-acceptance and the concept that all things European or flaxen haired are inherently beautiful. Through the use of multimedia outlets, advertisements reinforce the superiority of straight hair. Even when African Diaspora models are used in these advertisements, their hair texture tends to be abnormally similar to their European counterparts. The history and the political ramifications, combined with the continuous messages relating to the supremacy of flaxen hair, all converge in the minds of members of the African Diaspora, producing a drive to achieve the European standard of beauty. In this quest, naturally short curly hair (what many have been conditioned to see as ‘kinky’) is subjected to pulling, wrapping, hot combs, and various chemical processes. Fortunes, like that of Madame CJ Walker, have been made at the expense of self-dignity. 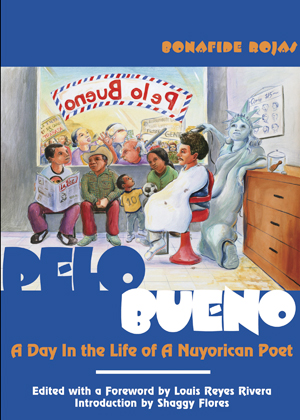 Hair straightening is not the only manifestation of the elusive desire to assimilate. Other industries, such as skin lightening creams, have also emerged to feed this hunger. The difference between other industries and the hair care industry is that while skin lightening creams have become marginalized, the quest for straight hair has embedded itself so deeply into the subconsciousness of the Diaspora that it is now unacceptable for a woman with kinky hair not to straighten it. Wearing one’s hair in a natural style can be the cause of a range of reactions from being passed over in corporate promotions to eliciting frowns from fellow Diasporics.

Fast-forward to the early 1990’s. It is the annual Puerto Rican Day parade in New York City. In a sea of oscillating bodies there is one figure that stands out from the crowd, a young poet with a large Afro blowing in the wind. He and his Afro stood together in defiance of the hair police and the notion of Pelo Malo/Pelo Bueno.  On that day, in that crowd, I met Steven “Bonafide” Rojas, a poet whose full head of hair stood as a proclamation that embodied the spirit of the Nuyorican and Black Arts movements.

Immediately, Pelo Bueno is Bonafide’s attempt to create a space for a dialogue and for an introspective journey into the concept of “Pelo Bueno” (Good Hair) and “Pelo Malo” (Bad Hair). In flipping the script, as we say in the Barrio, the reader is challenged to view kinks or naps as elements of beauty and to question the presumption that one’s own natural features are somehow undesirable and subject to elimination. With the Afro or Natural, we find the elegance of a people who have overcome slavery and its ramifications. Gone are the minstrel shows of the 19th and 20th centuries. Through this book, the poet replaces those images with resurrected memories of the Young Lords, Brown Berets, and Black Panthers proclaiming loudly that they are “Black and Proud!” and that among them are an Afro-Taino People!

But Pelo Bueno does not stop short as a simple social commentary on issues of identity, racism, and psychology within the Diaspora. It also serves as an in-depth look into the life and times of a New Generation Nuyorican poet.  A poet who is among those now at the forefront of a literary movement that began in the 1930’s, solidified itself in the 1970’s, and transformed into the current Spoken Word Revolution seen on cable television. Through Bonafide’s poetry you see the Puerto Rican experience told by an emerging artist who believes, as Nuyorican scholar Louis Reyes Rivera would point out, that there are poets… compelled to serve as cultural workers on behalf of the disinherited.

Bonafide Rojas uses language and contemporary music to challenge the norms and status quo. Through his use of language, the rhythms of Hip-Hop/Rock & Roll speak with a Bronx Boogie attitude that reflects his Nuyorican roots. A child of the Puerto Rican Diaspora transplanted to the streets of Nueva Yol, Mr. Rojas uses his words as blades, cutting through the absurdity and deceit that often plague our judgment.

In the tradition of Julia De Burgos, Clemente Soto Velez, Pedro Pietri, Victor Hernandez Cruz, Tato Laviera, and the many others who have pushed a Puerto Rican literary canon, Bonafide Rojas holds his place within this esteemed group. Through poems like Creed of a Graffiti Writer, Invisible Ones, and 25 Years In, we see the maturity of a writer spitting in the wind, his Nommo creating poems that resurrect ancestors and endorse empowerment. While many in the Nuyorican canon would be content with poems that speak to their personal experiences, Mr. Rojas chooses to personalize issues of oppression and cultural preservation.  His dialectic focuses on several themes—the immigrant experience in America, tales of wasted talent in an Andy Warhol Era, and visions of war in faraway lands speak with clarity and power.

Not only does the poetry in Pelo Bueno call for academia and the literary establishment to take a deeper look at the Nuyorican experience, it also serves to teach and encourage future generations to preserve their literature. With one of the highest illiteracy and drop out rates in the country, the Black and Puerto Rican communities benefit when one of its own bards delivers a tool for reaching forgotten youth.

Through his live readings across the country, email requests for samples of his poetry, national Slam competitions, and youth poetry workshops, Bonafide has made it clear where his poetry lives and breathes. Pelo Bueno, in all of its beauty, resides in the heart of transglobal Barrios where the poor congregate to tell their stories of survival and perseverance. This book is a convergence of Bochinches and Encuentros, mixed with rhythmic verse and B-Boy, Beat-Box body bravado. Break-Dancing in the pages of Pelo Bueno are tales of neither here nor there and the futility that faces a people pushed to the borderlands of Imperialism. Bonafide navigates carefully, his pen moves, we watch, read, listen, and hope that tomorrow the next poem will remind scholars that an artist committed to his craft can never be denied.

J H.Flores
@southofharlem: Got my new Graphic Design PC from @cyberpowerpc today! I call it the Storm Trooper since it… https://t.co/Hck30mdPsc
64 months ago