Entitled, “Open Mic/Micrófono Abierto: Nuevas Literaturas Puerto/Neorriqueñas/New Puerto/Nuyor Rican Literatures”, and guess-edited by the Puerto Rican critic Juan Flores and the Puerto Rican writer Mayra Santos-Febres, professors at Hunter College (CUNY) and at the University of Puerto Rico, respectively, this 300-page issue is published by the Latin American Writers Institute, a division of the Office of Academic Affairs at Hostos Community College of CUNY.

For this issue, the editors have highlighted “a new crop of writers, first emerging around 1990, who approach the idea and practice of ‘Puerto Rican literature’ from new angles and with new meanings. Some new texts written from this perspective set out to pronounce important changes within the literary field of what had been referred to as ‘Puerto Rican/Nuyorican literature’ for more than two decades. 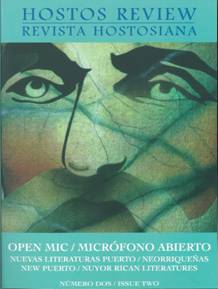 One first and immediate innovation is that these writers place in doubt, openly and without reservations, the very distinction between the two creative locations. Without ignoring the obvious differences between the two settings, for the youngest Puerto Rican writers there exists but one ‘Nuyor- Puerto Rican literature,’ whether in English or Spanish, from more varied points of geographical origin than Puerto Rico or New York.

The themes of this writing are also much more varied than those centering on national identity, which is now no longer viewed as a monolithic and internally coherent block attached to a given language or geographical space or ethno-racial traits; rather, that complex and engaging matter of ‘being Puerto Rican’ is now associated with a highly porous territory riddled with contradictions and diverse, clashing social and personal experiences.

Hostos Review/Revista Hostosiana mission is to build bridges between Latino artists and intellectuals in the United States with their counterparts in Latin America and other parts of the world.