jhflores May 15, 2013 Comments Off on Deborah Magdalena

Who are you?
I am a proud woman who was born in Puerto Rico, raised in NYC and seasoned in Miami. I have artistic blood running through my veins, Ryan Seacrest musical hosting skills, an Oprah poetic style to inspire, and smeared with a unique sense of humor that makes one laugh and cry all at once. Topped with a whole lot of FUNK.

What do you do?
A performance artist who’s mediums are Spoken word that speaks to your soul, music that moves you, and dramatic acting skills that rips the stage and screen.

How do you do it?
In-schools, open mic, national stages, film screen, festivals, on the page, theater stage, CD, online and offline. The mission is to entertain while inspiring however and at whatever means necessary.

Does your work impact your community and how?
Inspired by WomenArts, who began SWAN Day (Support Women Artists Now), an international holiday which celebrates women artists on every last Saturday of every March, I launched Spoken Soul Festival. Spoken Soul Festival is a 3 day festival which celebrates, embraces and helps novice women artists become successful professionals. This festival has changed my life, many women artist’s life and our arts community as a whole. We have built a sisterhood that has nurtured new and old artist activists that continue to inspire us all. www.spokensoulfestival.com

Through the festival and my body of works like FUNKdalena, a FUNK trilogy body of work that follows a LOVE ADDICT finding peace and redemption from an emotional suicide, I am an open book. I am constantly searching for inner peace, excellence, a sense of community and self-love. Leading by example, I simply am a beautiful imperfect human being who wants to inspire others to know that we are all “beautiful imperfect human beings”

BIO
Deborah Magdalena was born into a very talented musical family. As the sister of Latin Grammy winner Nestor Torres and grandniece of legendary Puerto Rican singer Ruth Fernandez, it was in her blood to entertain friends and family from an early age with her spontaneous comedic sketches and dance numbers.

Hollywood was at her doorstep literally and figuratively on September 11, 2001, when a phone call from her best friend Tanya drastically changed the course of Deborah’s life. She felt like her spirit was about to jump out of her body when she learned that Tanya’s firefighter fiancé, Sergio Gabriel Villanueva, was down at the South Tower of the World Trade Center. During the yearlong journey of yearning to heal while learning to accept her family’s loss, Deborah turned to writing poetry and launched a new career of performing her spoken word with vigor and pain at open mics across the country. 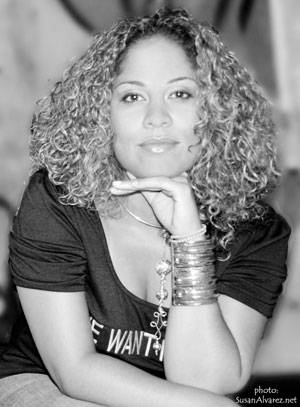 The process proved to be cathartic as she was reminded of how much she enjoyed the immediate audience response and impact, and subsequently, Deborah released two spoken word CDs- Spoken Soul: A Survival Kit of Poetry and Deborah Magdalena LIVE. In 2010 she released her first chapbook, Heartbreak Haiku to rave reviews.

In 2007, Deborah combined her bilingual hosting style with comedic and musical skills alongside DJ / Producer The Brass King, created a unique poetic cabaret show called The Alma Lounge which had a SOLD OUT six-month run at the notorious Miami Beach hotel, The Raleigh.

Understanding the power of the written and spoken word, Deborah’s goal became to not only entertain but inspire others’ self-healing through poetry with a comedic twist, and South Florida’s arts community welcomed Deborah with open arms. In between her busy shooting and performing schedule she stayed true to her goal and found a deep passion for working with kids and women artists. With poetry in one hand and music in the other, Deborah set out to work with kids in after school programs funded by Arts For Learning, and personally authored an original poetic program called After School Zen, which she taught in front of 200 kids from first thru sixth grades.

In the spring of 2009, The Dranoff 2 Piano Foundation commissioned Deborah to workshop and produce Piano Slam 2009 & 2010, one of the Adrienne Arsht Center’s community signature outreach programs. Piano Slam brings classical music and a poetry contest to inner-city middle and high school kids across Miami Dade County. The program culminates with a performance by poetry contest finalists accompanied by renowned pianists at the John S. and James L. Knight Music Hall in Miami, FL.

Continuing her work with high school students, in 2010 Deborah was commissioned by National YoungArts Foundation, the sole nominating organization for the U.S. Presidential Scholar in the Arts, to be one of their in-school presenters and programs assistant for their core program YoungArts. Since then she has inspired more than 2000 young artists and helped supervise various master classes led by the likes of Bill T. Jones and Robert Redford.

With a continued poetic force, Deborah was inspired by the healing power of the arts in women’s lives and founded Spoken Soul Festival in 2008, an annual three day festival that supports women artists by helping them move from novice to professional artists. SSF coincides with WomenArts’ international holiday SWAN Day (Support Women Artists Now Day). WomenArts has recognized the Spoken Soul Festival – SWAN Day Miami as one of the top five SWAN events worldwide because the festival is one of the largest SWAN events and one of the most effective in training and supporting the participating women artists. Since its launch in March 2008, the festival has been awarded proclamations from the City of Miami Beach, Miami Dade County and the City of Miami as well as a City Of Miami special City Seal.  Featured artists have been commissioned or featured for shows during Art Basel – Miami, Gibson Guitar Showroom, New York Fashion Week, and Gen Art’s Fresh Faces Miami.

Wanting to lead by example, Deborah still continues to create and bare her poetic soul.